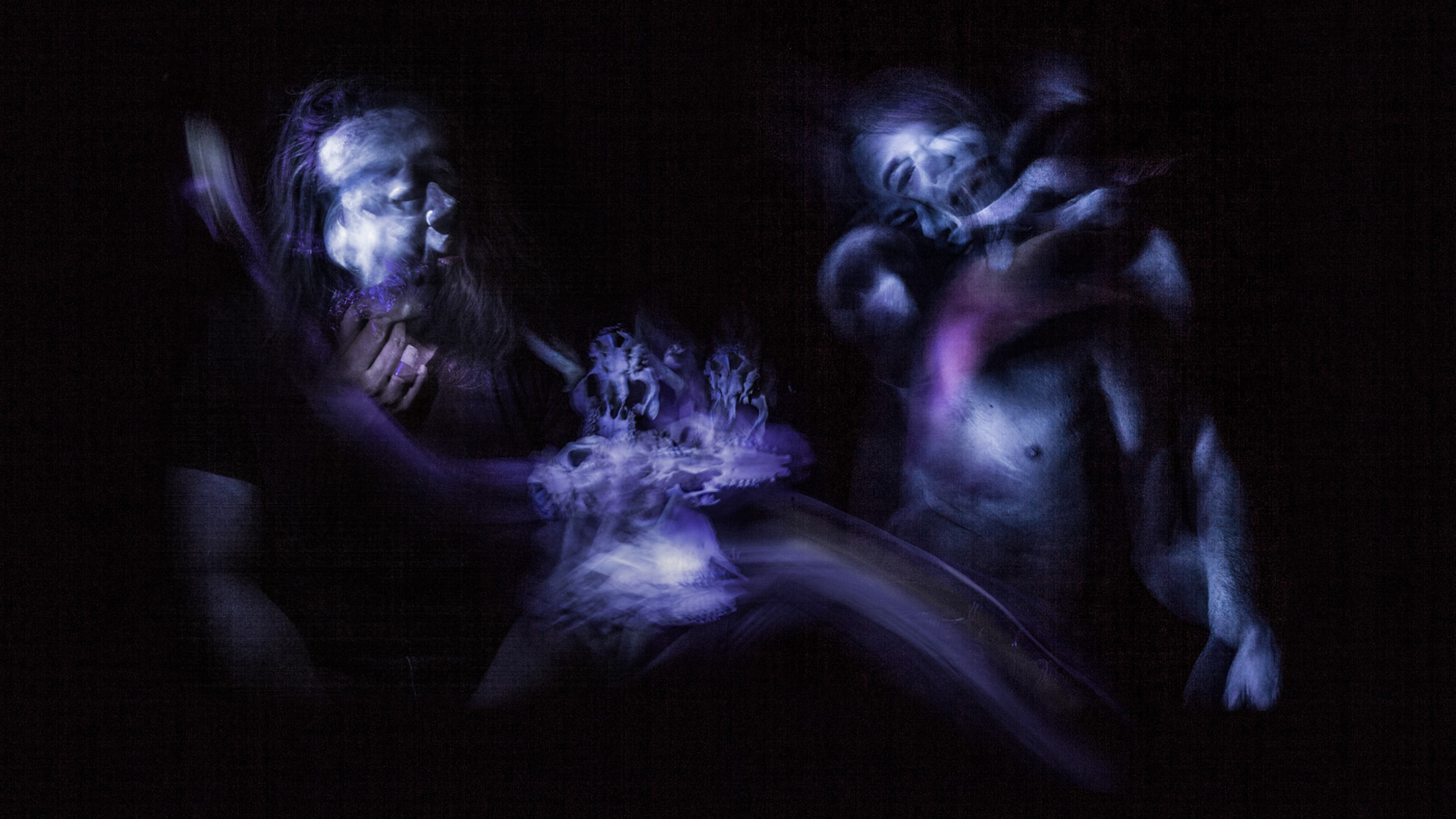 How do you make these images?
– Deep down in the basement of our favorite photo equipment rental shop we found a UV flash that nobody has borrowed in over ten years. That was the initial spark: What if we could deconstruct and then reassemble the elements of a photo. Namely, what light is reflected and how.
– Knowing a bit about oil paints and pigments, we developed our make-up technique – which is actually more like painting.
– Then we experimented with the lighting. We used small UV lamps, some special filters, and a kind of manual exposure
– then the person we photographed moved
– and we moved with him…and it all came together. We were surprised.
– The funny thing is: We haven’t actually used the UV flash yet. It inspired us to do something more interesting.

What is so special about UV light?
– UV light has some fantastic properties! The most important one is: You can’t see it! But when recorded with a camera, it reveals a whole new world.
– Just like in astronomy, where you see high energy processes in UV, and the Milky Way, for example, looks totally different
– or when you discover traces of sperm on a victim’s skirt.
– We always forget that we can’t see 99 percent of the electromagnetic spectrum. That, whenever we see, we are 99 percent blind. Blind for all the realities that have decided to only reveal themselves in a dimension that’s inaccessible to us.
– We never see what a camera sees, although we always assume that.
– Photos carry an almost overwhelming temptation: To presuppose that the imaged object actually exists. This feeds into our deep desire for the real. Which is a kind of laziness: Don’t bother me with ambiguities! Don’t confuse me! Let’s forget about the process of perception!

What then is the photographic object, or the object of photography?
– That’s the interesting question! Light is emitted or reflected over time in some form, and it arrives at some recording medium. And then our brains reconstruct a scene, objects, emotions and meanings. It’s by no means a simple one-to-one correspondence. And this is what you can actually experience with our photos. The arrow of reference is broken. It now points to time, motion, the recording process and to the viewer.
– Two friends of mine got into a heated argument over what it actually is that they see in one of our photos. Late at night they called me to decide who’s right. What a wonderful misunderstanding! It’s quite futile to even ask for an answer. That’s the desire for the real. Reality-addiction.
– But photography can uncover this addiction. Imagine a painter would have produced the very same image. Then you can relax and say: The painter wanted it that way. But in our case it’s not the artist who causes the transfiguration. It’s the camera and the process. Something we can’t control.
– It’s painting without painting.
– The dark room is in front of the camera!

You use a digital camera?
– Yes, but it’s a very, if you like, organic process. CMOS sensors have a soul, too! (Although, of course, souls don’t exist.) You can see how the sensor struggles, lapses, how it conflates things, forgets and ignores. It’s fighting to get an image. It’s not made for this!
– It’s the same with us! It get’s interesting if you’re not made for something.
There’s no digital montage involved?
– No montage whatsoever. It’s a kind of directed accident.
– To play with happy accidents is essential. Francis Bacon, for example, discovered that images are more forceful if they happen unintentionally, irrationally. We developed our technique to create these happy accidents. It’s a bit like summoning a demon or performing a magic ritual, a rain dance. And then something altogether different happens.
– The composition, the textures, the emotions. None of this can be controlled.
– That’s why the photos are like a gift to us.
– Often, when I see photos in a professional context, it’s as if I can hear a hundred different voices: We want the make-up like this, the light like that, the model, the look, the editing…a cacophony of demands. That’s why it’s such a relief that with these photos wanting something is irrelevant.
– We made a curious observation: most people immediately ask: How is this done? It’s like a reflex. As if they all want to become artists. Or physicists.
– People cling to how it’s made, the process that leads to the image, but what’s more interesting is: what happens afterwards? What does the image do with the viewer? But that’s a much harder question to answer.
– The question about the technique is maybe a bit like a displacement activity. If a cat can neither eat nor go outside, it licks its balls.
– You don’t have to talk about the important stuff.
I noticed that I discovered new things in your images if I kept looking…
– Yeah, you can see different things depending on your viewing distance, what you focus on and whether you see it in bright daylight or illuminated by a candle.
– The question for us is: How long does an image take?
Most images happen way too quickly. Ah, that’s that, got it. Finished. Boring. We all know too much about images, we’re desensitized. We’ve got calluses on our corneas.

So, how do we get rid of them?
– I don’t think there’s a recipe for that. It may happen. The first person you have to surprise is yourself. Which is a bit like trying to tickle yourself. The bigger the distance between intention and effect, the easier it gets.
– We noticed something strange during one of our first shootings. We worked with a wonderful, funny and charismatic actress. She’s not easily impressed by anything and she’s accustomed to the photo shooting process. During breaks she saw the images, she was shaken, as if she saw a ghost, and almost cried, unable to say what had happened.
– Sometimes you feel like a butcher when you record things.
– Maybe it’s the unusual, spontaneous combination of vulnerability, beauty, violence, sex, decay and dance.
– The movement creates bone-like structures, as if the person was turned inside out. Sometimes it looks like an exo-skeleton, like a cyborg. When the mouth is opened, it becomes a scream and you can see inside the skull.
– Which can be terrifying. Or funny and liberating. A young girl, decaying, a man with breasts…
– We look at the images during the photo shoot, which creates an emotional feedback loop between the photos and the subject.
– That’s why the photos are portraits in a deeper sense and the reason why they come out differently depending on this feedback loop and how it influences the person’s mood, movement and rhythm.
– After every shooting, we observe a kind of after glow effect…we want to sleep, close our eyes, and then the show begins…the brain continues to produce the images in a furious frenzy. The visual cortex laps up the images, and then spits them out again for its own delight.
– I suppose that’s the connection to Francis Bacon. Of course, we noticed some similarities. But they are absolutely coincidental.
– The question is: Why did Bacon paint something we photograph? Because: Even if we tried as hard as we can, we couldn’t photograph what Bacon painted. But maybe there’s a common cause: The things the visual system is hooked on.

Isn’t it problematic, if things work too well, too automatically?
– Absolutely! Maybe you could say that that’s one of the great themes of modern and postmodern art: The struggle of the artist with the reflex-like biological and cultural expectations of the viewer. Himself included.
– Like this: Oh yeah, you want oil paint? Bright colors? Naked women? A nice landscape? I’ll give it to you! You reactionary pig! I’ll give you this: A black canvas, a pile of garbage, a soup can…and so on. That’s how this slightly sado-masochistic game called modern art developed.
– We should put a sticker on our stuff: All the genitalia you see in these images are a product of your own fantasy.
– One should never use images just as wanking material for one’s associations. Art is not a Rorschach blot for the dying middle class. It’s not enough to idly dwell in the pool of your own associations. Because then you’re a complacent consumer of your own unconscious aesthetic reflexes and naive desires. Then you’re gullible…Seduction works best if it works unconsciously. So…
– When I was a little kid I used to run along the beach, with my upper body twisted, I watched my legs run. I was intrigued. My family thought I was nuts. Just as I was fascinated by my running legs, I’m fascinated to watch how my brain wants to see images.
– And that’s what you can do with our images. You can watch yourself watching. You can observe how you want to see. And then you can play!

Link to a selection of works: https://leviseur.com/art/studies-for-an-illumination/